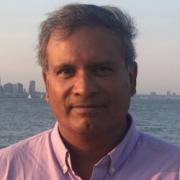 Kanna’s primary interests are in building complex systems in software for decision-making for real world environments including the harsh confines of deep space and the deep ocean. His career has spanned academia, government, private industry and the non-profit world all in the United States and mostly in California. His background is in Autonomous Systems, in particular in Automated Planning and Execution and agent architectures. His work lies at the intersection of AI, Robotics and Oceanography. He spent more than 10 years at NASA Ames Research Center where his software flew on two space missions, the 1999 New Millennium Deep Space One Remote Agent Experiment (RAX) and the 2003 Mars Exploration Rovers mission (MER). His early work involved scheduling maintenance routing for A to D checks of all aircraft, at American Airlines using an internally built scheduling engine (MOCAA), which continues to being used 24X7 at the airline.

He was a principal of the NASA Deep Space One Remote Agent which designed, built, tested and operated the first AI-based closed-loop controller in space, 65 Million miles from Earth. His contribution was in the design and implementation of the embedded  planning/scheduling system. Subsequently he was the Principal Investigator of the MAPGEN control-system, the longest running AI-based system to date and in a mission-critical environment, which commanded the Spirit and Opportunity rovers on the surface of the red planet. He is the (co)recipient of the 1999 NASA Software of the Year Award, the 2002 NASA Public Service medal for RAX and other contributions to the agency and the 2004 NASA Exceptional Service medal for MER, among other honors.

In 2005 he moved to the non-profit, Monterey Bay Aquarium Research Institute (MBARI)  in California as the Principal Researcher for Autonomy and has since focused exclusively on developing and fielding autonomous system technologies and methods which can enable ocean scientists to study our rapidly changing environment. In this context he has been working closely with technologists, physical and biological oceanographers with a focus on embedded planning and control, statistical Machine Learning, spatial statistics and Sampling Theory. With colleagues in the US and Europe, he is now focused on integrating oceanographic observations across space and time with Small Satellites, aerial, surface and underwater vehicles looking at a patch of the ocean co-temporally. He spent four years as International Chair Adjunct Professor at the Norwegian University of Science and Technology in Trondheim supervising PhD students, junior faculty, overseeing projects and writing grants for ocean facing applications.

Kanna continues to hold a courtesy appointment as Visiting Professor at the University of Porto, Portugal’s Underwater Systems and Technology Laboratory and advising Phd students and post-doctoral scholars in Norway and Portugal.