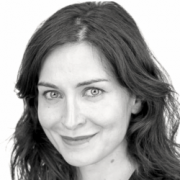 Sonja is a Principal Research Scientist and SIFT’s leading social scientist for technological systems innovation. She is our in-house “translator” and facilitator of the conceptual understanding between engineers and users of technological systems. She has pioneered new research domains and seeded several research projects with government funding agencies in the human domain. She has 12 years of experience as Principal Investigator on several multi-million-dollar DARPA-funded research projects merging social science with technological innovations. Her focus is on bridging qualitative with quantitative research methods and bringing together big and thick data.

As socio-cultural anthropologist, she works at the front end of the product development process, ensuring that research questions are meaningful and grounded in theoretical epistemologies - as well as at the backend, on contexualized interpretation, explanation and explication, insight generation, socialization of findings, and stakeholder presentations. Her research areas are social and cultural identities, gender bias, politeness, discourse analysis and NLP, trust and values, moral disengagement, and AI ethics.

She is currently leading projects for DARPA in the following domains:

HUGO (Humanitarian User Group Oversight) is SIFT’s contribution to DARPA’s Civil Sanctuary program.  The goal of the project is to learn online moderation strategies and use social theory to moderate conversations in a way that motivates pro-social behavior (and thereby reducing abusive, toxic, and harmful behavior), especially as it relates to humanitarian aid efforts.

Under TYBALT (Transcending cYber Barriers with Automated Language Tracking), we are working on the identification of harmful intentions towards others (or self), especially intentions that express harm, dehumanization, and violence. We have developed transformer-based NLP based on Albert Bandura’s Moral Disengagement framework to detect moral justifications for hateful intentionality. For example, we are looking at extremist fringe groups like the Incels, marked by specialized jargon, and offline violence.

MARGARET (Multidimensional Algorithm Generated Anthropological Recording and Ethnographic Tool) was part of DARPA’s UGB program. Under Margaret we worked with Dr. Jure Leskovic and his team at Stanford University. We used big data analysis to quantify gender biases in Twitter data and showed that gender bias correlates with gender inequality statistics and values related to gender inequality based on the World Value Survey.

For HABITUS, we are further combining anthropological and computational methods, building a cultural model of maternal health in Nigeria. We use narrative data, collected by our collaborators at Navanti and TwoSix Labs, to extract knowledge graphs and causal relationships to better predict “what locals would predict”.

Other projects Sonja was the PI for:

She was the PI of VANESSA (Virtual Analysis Networks and Explanations for Social Sensing Analysis), a Phase 1 STTR with the goal to develop a social sensing platform that can provide diagnostics of multiteam networks and recommendations for enhanced team functioning in human-cyber teams. Our academic partners are at John Hopkins University and the Cognitive Sciences Laboratory at the University of Central Florida.

She also worked on ADMIRE, integrating psycholinguistic approaches to detect social dynamics in written text, ELADIS where she worked on the data collection and analysis of physiological and behavioral data, as well as on AD ASTRA, a NASA funded project, for which she worked on the identification of factors impacting psychosocial states during long duration space missions. She was involved with DARPA’s SocialSim Program and associated efforts like PERFECTA and ACUMEN.

Prior to working at SIFT, she was employed as research scientist at the Social, Cognitive and Affective Neuroscience Lab of Dr. Ed Smith, Dr. Tor Wager and Dr. Kevin Ochsner at Columbia University, where she worked on several projects investigating the interaction between the neural basis of emotion perception and bodily expressions. She worked on research of stress resilience to post traumatic stress disorder (PTSD) among 9-11 terror attack survivors, a study investigating why psychological and neural mechanisms render some individuals resilient in the face of trauma. She worked also at the Davachi Memory Lab at New York University on projects related to social interference learning and the  influence of social context information on emotional processing and memory.