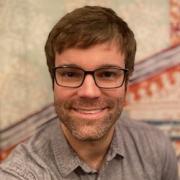 Dr. Matthew (Matt) McLure is a SIFT researcher specializing in Artificial Intelligence. He has published on learning by analogy, knowledge representation and reasoning, with a focus on sketched and geo-spatial data, in venues such as AAAI, CogSci and AI Magazine. Prior to joining SIFT in 2019, Dr. McLure completed his Ph.D in Artificial Intelligence from Northwestern University, where he was a member of the Qualitative Reasoning Group. His thesis work, funded by AFOSR, aimed to develop an AI that could learn to draw and draw to learn. He was involved in designing and building the Companion cognitive architecture and the open-domain sketch understanding system CogSketch. Since he joined SIFT in 2019, Dr. McLure has worked on SIFT’s Clic project for DARPA's CWC program, as well as Project7, the collaborative intelligence analysis workspace initiative funded by AFRL, where he has developed UI components that facilitate human-AI interactions and provide geo-spatial insights. He has also created a hypothesis framework and tools for classification, visualization and testing as part of SIFT’s OpenMIND project for DARPA’s SAIL-ON program.  More recently, he has been involved in natural language processing work for DARPA's Habitus program and the TYBALT Phase 2 SBIR, where he has developed SentAUR, the Sentence Asset Unified Reader.