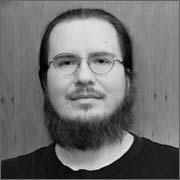 Mr. Keller is responsible for the design and implementation of research applications that run the gamut from mobile platforms to computing clusters. He has worked on the implementation of the CALM and ADEPT projects and contributes to the implementation of the STRATUS project. Prior to joining SIFT, Mr. Keller was Academic Staff at the University of Wisconsin--Madison on the Condor Project, a high throughput computing and batch scheduling system which could scale to tens of thousands of computers and at least hundreds of thousands of submitted jobs. Mr. Keller maintained and extended user space algorithms which implemented process checkpoint and migration in addition to writing extensive test suites for them. He optimized the DAGMan workflow manager to recover from failure states in minutes instead of dozens of hours. He extended the DAGMan tool to handle one million nodes in its workflow dependency graph up from one hundred thousand. He enhanced the usability and reliability of Condor's configuration system. He managed successful collaborations with the Laser Interferometry Gravitational Observatory (LIGO) group in Milwaukee, WI and the Distributed Multithreaded Checkpointing (DMTCP) group at Northeastern University which resulted in significant bug fixes, new features, and completion of scientifically important work. He has more than twelve years of experience working in distributed systems programming on a variety of platforms in a research and production environment.