The objective of the COPV project was to develop a technique to optimize task allocation between human and automation. Note: This project is also seen in the Automated Interface Evaluation Tools category. 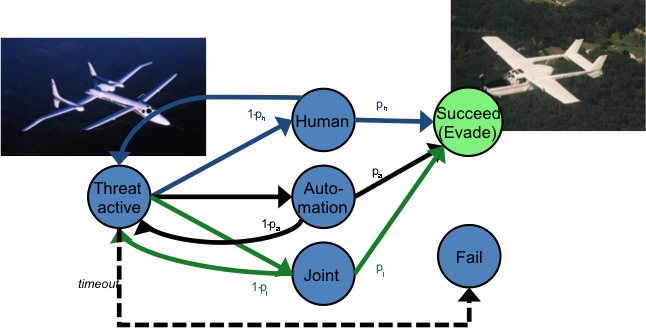 Control of Optionally-Piloted Vehicles: An optionally-piloted vehicle (OPV) is something like a "piloted UAV"; the OPV is able to fly itself autonomously, or be operated by a human pilot, and human and automation should be able to trade off functions. The objective of the COPV project was to develop a technique to optimize task allocation between human and automation. As the human pilot was required to carry out more important tasks, the OPV would take over more routine ones. For example, the OPV might autonomously file a spot report (a required report made upon contact with enemy forces) if it could detect that the pilot was executing a complicated maneuver. SIFT addressed this optimization problem by "unrolling" a cognitive task model (based on IMPRINT) into a Markov Decision Process (MDP) and solving that MDP for an optimal policy of task allocation. The COPV Phase I SBIR led to the PVACS Phase II SBIR performed jointly with Geneva Aerospace (now a part of L3 Communications). The MDP unroller and solver developed in COPV were later used in the DARPA Coordinators program, where SIFT was a subcontractor to Honeywell International.