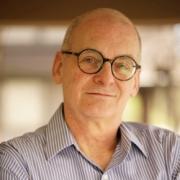 Mr. Funk has authored or co-authored over 30 papers in the field of human-centered system design. Relevant examples may be found in the references.

Mr. Funk has US and international hardware patents and patents pending on related information management products.