SIFT has developed an architecture for Interactive Phrasebook which makes use of our existing etiquette algorithm and embeds it in a broadly usable mission rehearsal tool for cross-cultural interactions. 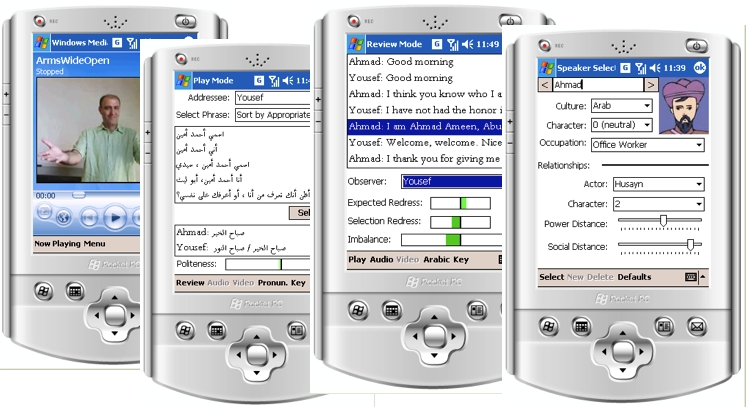 Interactive Phrasebook makes use of our existing etiquette algorithm and embeds it in a broadly applicable mission rehearsal tool for cross-cultural interactions. As the diversity of roles and locales in which our soldiers must operate increases, we are asking virtually all of our soldiers to be cultural ambassadors, conflict arbitrators, detectives and social workers. These roles must be practiced across a largely unpredictable range of cultures, ethnicities, religions and social and political groupings, not to mention languages, throughout the soldier’s career. Given the limitations in human resources required to provide such training, a computer-based training system may be the only viable solution. A computerized Non-player character (NPC) which displays social characteristics consistent with its cultural background can provide cross cultural training in an appropriate manner. Such a system would allow humans to train with realistically-behaving simulations of the contexts with which they will be required to work, and more importantly, with the types of people they will be required to work with. While it is unlikely that simulations of interactions with cultural natives will be able to completely replace human-mediated training, simulations may be used more frequently, with lower cost and with much more versatility than can interaction with trained or skilled humans—such as native speakers of a language. In addition, simulations can be used to supplement prior training. We captured knowledge and language examples suitable for specific phrasebook scenarios in Modern Standard Arabic.