The goal of the LOA3 project is to develop a Playbook interface and automated planning techniques for the supervisory control of small teams of UAVs. 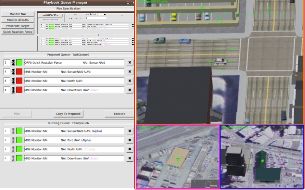 SIFT was awarded Phase 2 under A006-007 to be completed in February 2010. LOA3 stands for "Levels of Automation Cubed". The LOA3 project is developing a Playbook interface and automated planning techniques for the supervisory control of small teams of UAVs. SIFT developed a theory of Levels of Autonomy, expanding earlier work by Sheridan and Verplank (1978), and Parasuraman, Sheridan and Wickens (2000) to create a three dimensional model for characterizing levels of autonomy, where the dimensions are

This project is funding novel developments and extensions to Playbook to manage multiple concurrent plays and to represent and reason about the goals associated with plays and their priorities.  Furthermore, in conjunction with Raja Parasuraman and his lab at George Mason University, we are conducting a series of exploratory experiments about conditions under which plays function more or less well using this new and expanded version of Playbook.